Helen Caroline Peirce was all of these things and more. Her life was one of both struggle and triumphs and it embodied many of the aspects of the IB philosophy and framework that our school is based on. We find her to be an inspiration and are celebrating her 179th birthday the rest of November with this Pledge drive and a birthday party on December 5.

-----
DONATE
Let's be like Helen by living up to her philanthropic and service examples.
Donate your gently-used Warm Winter gear. Help keep our kids warm and safe while at school by donating coats, hats, mittens, and more. They will be used to provide warm clothing to those who need it during recess and lunch outside as we continue to weather the pandemic as winter approaches. Items in excess of what Peirce needs will be donated to Care for Real. Gear can be dropped off at our Birthday Celebration on December 05.
Become a family sponsor. Friends of Peirce's mission is to provide educational opportunities for the students of Peirce and we could not do that work without the help of business and family sponsors. Help us achieve our goal of 179 family sponsorships by pledging today. Your donation is greatly appreciated.
DONATE NOW
-----
CELBRATE
Join us on Sunday December 5 from 12–2pm for treats, hot drinks, music and community. We will hold our birthday party for Helen C. Peirce on the Peirce field. This is a free event. Bring any Warm Winter gear for donation.

Helen Caroline Peirce was born in India on December 5, 1842.  Her family in her early years traveled to Canada and shortly after that immigrated to Chicago at the age 4, where her maternal aunt lived.  Helen lost her father during the travels from Canada to Chicago and shortly after arriving in Chicago, lost her mother and aunt leaving Helen an orphan.  Fortunately, Helen was adopted by James H. Rees and Harriet F. Rees.  James H Rees was one of the earliest of Chicago’s citizens and records show him having voted in Chicago’s first city election in May 1837.  Helen later married Luther H. Peirce in 1866.  Luther was a Chicago realtor.  Helen and Luther adopted two children, Charles and Clara, sometime between 1870 and 1880 per the censuses.  ​ 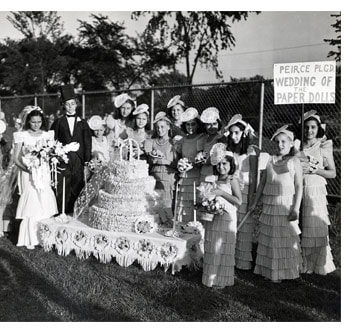 Helen C. Peirce became a very active community member in the Lakeview area in her adult years.  She was a founding member of the Lakeview Woman’s Club which consisted mainly of teachers and principals.  Mrs. Peirce served as the club's president from 1893 to 1897.  She served on the club board of directors from 1887 to 1901.  The main reasoning for her wanting to establish the organization was to have a group that was solely devoted to helping underprivileged women and children who lived on the city’s North Side.  The club acted by providing service to the community and held social gatherings and educational meetings inspiring social purpose.  The club was well organized and often lobbied state and local legislators to assist them in achieving their goals.  Mrs. Peirce demonstrated strong leadership and strong convictions on the importance of justice and equality in her work every day for the community.  She was a leader in petitioning the Chicago Board of Education to establish the first publicly funded kindergartens. The club also assisted in having women appointed to positions of influence such as memberships on the Chicago Board of Education, library and park boards.  Progressive Education, which embraced society, politics and education, was part of a larger movement in the United States from 1900 to 1920.  During the progressive movement, social reformers such as those who formed the Lake View Woman's Club, sought changes and improvements in society to benefit all.
Helen C. Peirce passed away at her home in Chicago on December 15, 1911, at the age of sixty-nine.  The cause of death listed on her death certificate was diabetes.  Cornelia D. Heile of the Lakeview Woman’s Club suggested that Mrs. Peirce be honored for her humanitarian works by having a Chicago Public School named for her.  On September 4, 1912, a board report was presented and approved, and the school was built on Bryn Mawr Avenue and opened its doors on September 6, 1915.  ​
As we celebrate this great human, the Helen C. Peirce School of International Studies, stands tall and strong today in 2021 because of the great work she and her fellow Lakeview Woman’s Club had started over 120 years ago.  Helen C. Peirce instinctively embodied the IB framework that our children work in today with education that encourages students to make practical connections between their studies and the real world.  Through Mrs. Peirce work at the Lakeview Woman’s Club, she set an example for our students on why it is so important to always strive to utilize our character-building attributes that we all have so we can bring our best self always to our day to day.  Helen C. Peirce was caring, an inquirer, knowledgeable, a thinker, a communicator, principled (integrity and honesty), open-minded, a risk-taker, balanced and though there are not tons documented on her life, we must assume she was remarkable at being reflective.  Happy Birthday Helen C. Peirce and thanks for setting an example so long ago for us to still live by today.